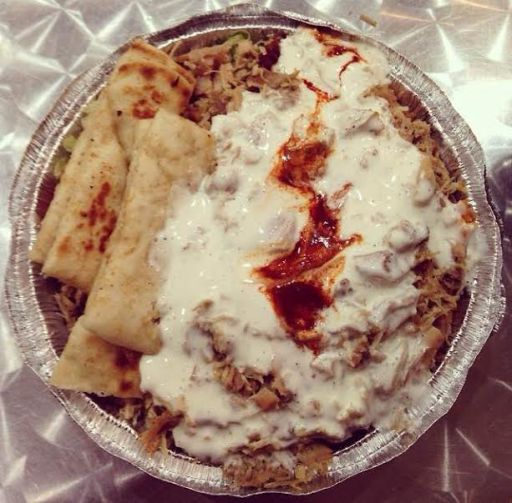 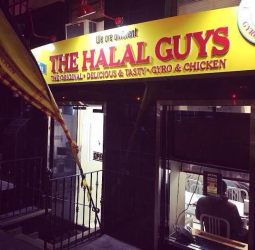 Although it doesn’t look like much, the chicken and rice platter from The Halal Guys is a NYC staple.  The popular food trucks have been drawing crowds since the early 90’s when they became the first food truck in the city to offer gyro’s and chicken rather than hotdogs or peanuts.

For $7, the platters come in huge portions of rice, chicken or lamb, lettuce, pita, and their famous white sauce and (extremely) hot sauce. I’ve never been by one of these trucks without seeing a pretty significant line…which goes to show how good the food is. The cheap street meat is a popular choice for both tourists and locals at all of their six locations.  Their original location (and usually most crowded), is on 53rd and 6th Ave, in front of the Hilton.

Because of their overwhelming popularity, The Halal Guys opened two sit-down restaurants in 2014 to accommodate their customers. The first opened in the East Village at E 14th St & 2nd Ave, and more recently their second restaurant in the Upper West Side at 722 Amsterdam Ave.

Laguardia Community College (Thomas Ave, in front of Building B)
10am to 8pm