If you’re a fan of Indian food you’re going to want to stop by Panna II in the East Village. Aside from their extremely affordable Indian cuisine, the atmosphere alone is enough to draw a crowd. Essentially, the inside of Panna II looks like a Christmas tree exploded. The ceiling is draped with thousands of chili pepper lights, giving mood lighting a new meaning. To top it off, your dinner is accompanied by traditional Bollywood music (making it impossible to have a bad time).

Years ago, the East Village had a pretty well known area with dozens of Indian restaurants in a section called Curry Row. Today most of those restaurants fizzled out, leaving just a handful left. Panna II is hands down the best that’s left, but that doesn’t mean the competition isn’t fierce. Panna II is situated directly next to and above two other Indian restaurants, Milon and Royal Bangladesh (which also have the Christmas tree vibe going on). Panna II (on the upper right in the picture above) and Milon (upper left) have doormen that wait outside, urging customers (fairly aggressively) to choose their restaurant over the other. Although the aggressive tactic is fairly uncommon in the rest of Manhattan (and the United States in general), it’s the norm in India and many Middle Eastern cultures. Although some may be taken back by the pushy doormen hustling in as many customers as they can, it adds to the authenticity of the experience. 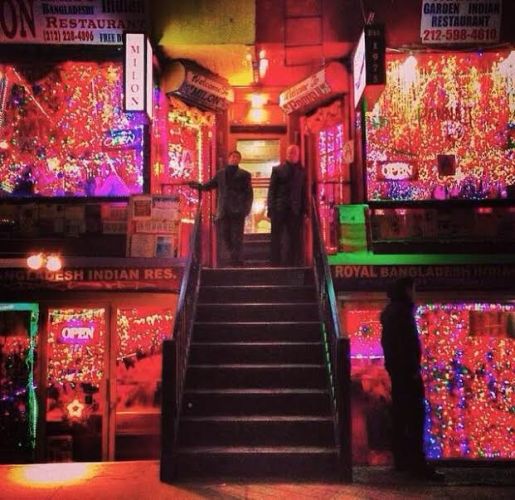 The food is amazing, and the prices can’t be beat (they also offer BYOB). They have a fairly sizable menu, which can be viewed on their Facebook page here. Full size meals are around $6, and they have tons of appetizers and Indian breads going for just a few dollars (by the way, you’ll get a complimentary scoop of their amazing homemade mango ice cream with your bill).

Panna II is cash only (ATM is outside).